Have you ever hit a shot that just felt perfect? If only there were more than one way to hit crisp iron shots like Tiger Woods 100% of the time. Oh wait, there are!

In this post, we’ll explore a couple of tips for hitting irons to refine your golf game and get ten times better at hitting 7 and 4 long irons.

How to Hit Long Irons

Every low handicap and amateur golfer will agree that hitting long irons isn’t an easy undertaking. If pulled off the right way, it’s nothing less of a magical, heart-stopping moment.

In truth, it’s a lot difficult to hit a long iron when you lack the required swing speed along with a consistent swing motion. It doesn’t have to be an uphill task, though.

Here are the fundamentals of hitting a 7-iron solid and more consistently:

One common mistake that newbie golfers make is to expect to hit every long iron shot inside 22 feet. Instead, set realistic expectations on your long approach shots.

You’re bound to get frustrated and consistently disappointed when you keep trying certain positions in your golf swing. When on the golf course, ensure your focus is constantly on the target. Allow your body to respond to your target along with the task at hand.

Once your target is set, make a fast and smooth swing for a relatively high ball flight. Keep your tension low and swing speed high.

Too much tension leads to a slower swing, making you think you have to swing harder for better ball control. Try staying tension-free and let your golf club swing free and fast. You’ll be amazed at the speed your arms and hands can generate.

Step 4 : Ensure you Have the Right Club

Modern driving irons offer higher forgiveness for higher and farther golf shots. Pick a club with a higher versatility, a graphite shaft, and a larger head. Graphite shafts are a lot lighter than their steel counterparts; you stand to increase your distance and swing speed.

The 4-iron is among the most difficult clubs to control. Try these five simple tips to hit a 4-iron better:

Step 1: Ensure the Ball is in the Right Position

While most pro golfers move the ball around at random points during different rounds, we strongly recommend that you maintain a forward ball position. Doing so will give the club more space to launch the ball higher in the air. The average 4-iron has approximately 24 degrees, making it relatively strenuous to get airborne.

Step 2: Use a Proper Set of Irons

Most PGA tour professionals look for more cavity back irons and added muscle back in their irons. This simplifies their game and offers a relatively lower center of gravity. Get fitted for clubs of a similar kind, and you’ll hit crisp iron shots even on your not-so-perfect days.

Don’t swing a 4-iron too hard in the hopes of hitting the ball an extra 5 yards. Slowing down the club speed stiffens up everything, so don’t let the club momentum do all the work. If you have a fast swing speed, the better your chances of hitting a 4-iron solid.

Step 4: Use the Shawn Clement Strategy

The Shawn Clement method might be just what you need to improve your game. The secret is just to maintain a positive approach and mindset. The creator of the strategy, Shawn Clement, believes that we’re gravity geniuses by nature. We’re not structured to hit specific spots but rather to consummate a task and let gravity do its thing.

How to Hit Irons Pure

There are two factors to consider in this case: the ball position and weight distribution. Ensure your weight is balanced perfectly in the middle of your stance, not your heels or toes. Next, take your clubhead and ensure it’s in solid contact with your front foot. Place the ball along the imaginary line that runs perpendicularly to your body. When using a longer club, you’ll notice that the ball goes further forward in your body position. With shorter clubs, the ball lies in the middle of your stance.

Step 2: Use the 5-Golf Ball Method

Draw a line running perpendicularly to your stance, then position five golf balls along that line. Try hitting each one without touching the area before the line. You can set up a camera in front of you and place it at least 90 degrees from the target line. Doing this will help you determine your swing arc’s low point later on when you go over the footage.

All through your round, try keeping track of your greens and fairways. Doing so makes you understand the areas of your game that need the most work.

It also helps to pick a flat area of the ground on your tee box. When teeing your ball in the middle of your tees, think about your shot shape first, then evaluate your hole layout.

How to Hit Down on Irons

4. Get a Tour Striker (or other trusted golf clubs). It’s one of the best training aids to improve your hitting skills. It also helps you to understand where the bottom of your swing lies. 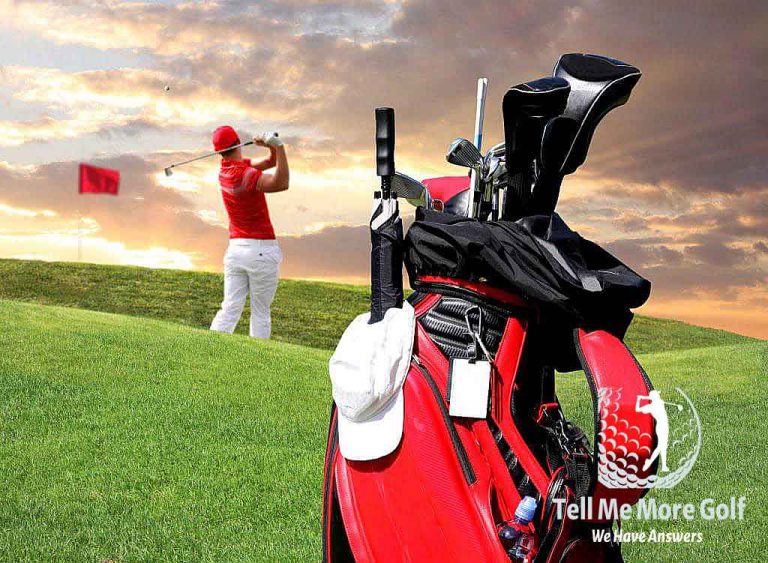 Your starting point should always be your address position. Ensure there’s an imaginary line running through your club shaft and up to your belt, then to your chest. Not only will this help keep your strikes consistent, but it also helps to stay in control of your iron shots.

Establish a pure strike by ensuring your spine angle remains intact throughout each swing. As you try maintaining your stance, ensure you make a complete, athletic turn.

Try not to sway off the ball. Doing so will give you a well-rounded base to attack your ball.

Finally, try turning your hips away to establish a lag as you start your downswing. Creating a lag creates more swing speed as it allows the clubhead to touch the bottom of your swing arc. It also helps a lot with inconsistent ball strikes.

How to Hit Golf Irons Properly

Here are some practical golf tips to improve your hitting skills:

How do I get better at hitting my irons?

Hit past and through the ball instead of hitting down on it. When you hit down on your ball, you might make poor contact and reduce your distance drastically. Your aim should be taking a divot after your golf ball and never before it on each shot. If you wish to take extra divots after the ball, you need to refine the pivot action around the hips in your backswing.

How do you hit irons consistently for beginners?

Choose a fitting iron. Consider several factors such as skill level, posture, height, swing style, etc. Use your dominant hand to get a firmer grip on the hand. Don’t grip it too hard, though; doing so might hinder a smooth and free-swinging action. Next, assume the proper stance. Ensure your knees are slightly flexed for better rotation and weight distribution when making your swing.

Why can't I hit my irons in the air?

This has a lot to do with your impact position (your clubface’s position when striking the ball). The club’s shaft shouldn’t lean too far back or forward at impact. Always ensure your ball is correctly positioned in your stance. Your short irons (8 and 9 irons, wedges) should be in the middle of your posture.

To make solid contact with your iron, you can try the right arm drill. Grip a 4 or 5 iron with your right hand alone, then assume your typical setup position. Swing your club down as though you’re hitting a ball. A one-hand swing will force you to power your club by pivoting your lower form. This helps to create more lag, which helps eliminate topped, thin, and fat iron shots.

Why are my irons so inconsistent?

This can be attributed to three main mistakes: an inaccurate weight shift, incorrect setup, and too much secondary axis tilt. Maintain the correct stance, then position your iron right before your ball. Ensure there’s no space between the ball and the club. Try upgrading your equipment to make adjustments to your swing. Consider using a quality golf ball as well.

Why am I missing hitting my irons?

This has a lot to do with your swing mechanics. The varying levels of tension may cause erratic swings. Try to keep your swings relatively tension-free. This way, you’ll feel the weight of the clubhead and allow it to direct your swings.