Hybrid vs Iron: The Differences Between Clubs for All Golfers

Hybrid and iron golf clubs have their pros and cons. But choosing one or the other may be daunting for you if you’re not a pro golfer. Even if you decide to go for one, let’s say the hybrid, you still need to learn the different club types, brands, designs, features, and specifications available.

Our professional golf expert at TellMeMoreGolf will compare 5 iron, 7 iron, and their hybrid club counterparts and how many hybrids you should carry in your bag. You’ll also find answers to pertinent questions like hybrid vs iron that’ll help you make an informed decision when choosing between an iron and hybrid club. 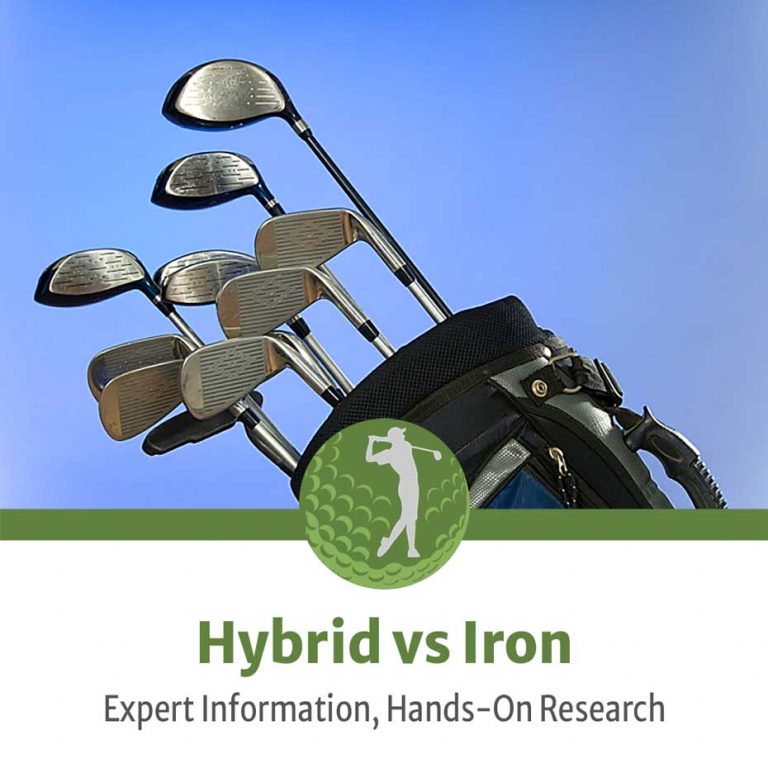 7 Hybrid vs 7 Iron: What's the Difference? 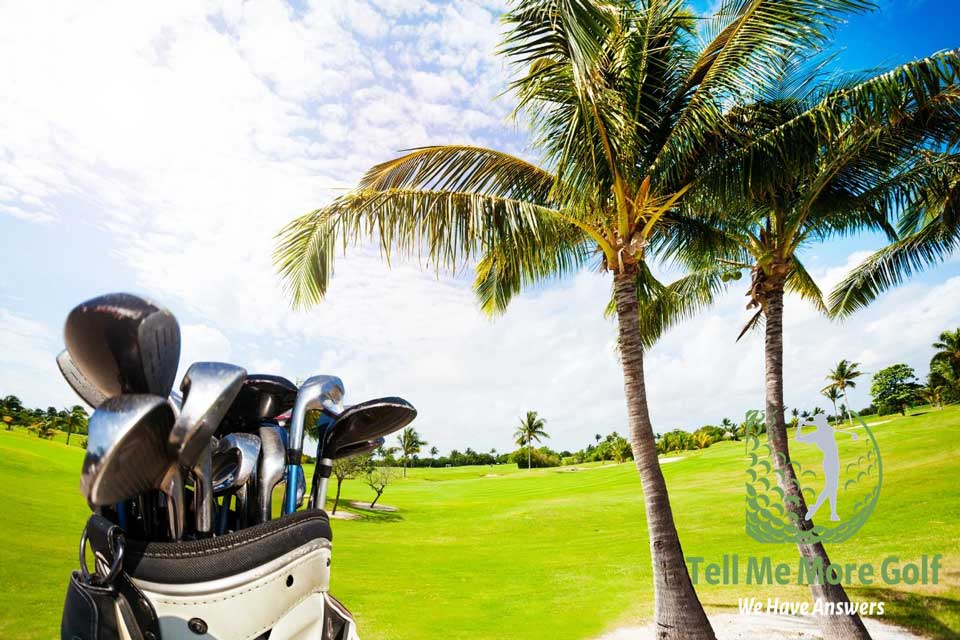 If you’re after game improvement, I’m sure you’ll be very particular about the club you put in your bag. Both 7 hybrid and iron offer some form of improvement but you need to understand which one is the most suitable for you.

The main difference between hybrids and irons is that 7 hybrid clubs are much bigger with a wider sole, compared to their 7 iron counterpart. This results in a bigger sweet spot which is important for consistent ball striking, straighter shots, and distance. That also means a 7 hybrid is more tolerant to play than a 7 iron. Additionally, hybrids are higher lofted and have a higher launch angle, which means superior carry distance.

Senior golfers who are struggling to elevate the ball will find the 7 hybrids a better option than 7 irons to add to their bags. A 7 iron, on the other hand, can deliver extra roll but launches slightly lower than a 7 hybrid, so it’s geared more towards better players with its shot-shaping capabilities and accuracy.

Take the Mizuno JPX Fli-Hi Hybrid, for example. It has plenty of shaft options you can choose from. This club makes for great gapping because it only goes slightly more than their iron counterparts. And since the shaft is shorter, shots can be very straight. Depending on where you’re buying, you can get custom shafts on your 7 hybrids to fit your swing too.

If you have slower swing speeds, you should go for a 7 hybrid because of its greater forgiveness and the extra yardage. You’ll get straighter shots and be more comfortable (and therefore confident) playing a hybrid than a 7 iron. If you’re an advanced player, a 7 iron might be more befitting as it helps you shape your shot and allows you to launch lower.

5 Hybrid vs 5 Iron Golf Clubs: Which One is Better?

If you’re still playing your 5 iron, you might be wondering what logic is behind dropping it from your bag in favor of the 5 hybrid. Would changing to a hybrid be game-changing for you or everything about them is just hype? Let’s find out:

Historically, hybrid clubs have always used the same numbering system as irons. Although, there is no standard rule that equates hybrids to irons. In theory, you should be able to swap your 5 hybrid club for your 5 iron since it’ll generally hit the same distance. Moreover, the forgiveness offered by hybrid clubs is far better, which explains why they’re so popular now.

A 5 hybrid head is bulkier than the longer conventional iron, which has allowed manufacturers to shift the center of gravity further back from the face of the hybrid club. This lower center of gravity results in a higher trajectory for a shot of a hybrid. What this means for you is that you’ll be able to hit the ball higher on your 5 hybrid than your 5 iron with the same loft. So if you’re thinking about choosing between 5 hybrid and 5 iron, go for the hybrid. It’ll give you better trajectory control, carry distance, and consistent hit. Or simply, if you don’t have the confidence to hit your 5 iron, you should consider swapping it for a 5 hybrid. Senior golfers will find the 5 hybrids fun and easier to hit, with mishits being less common and less punishing.

Typically, a 5 hybrid club will have a 5- to 10-yard increase over a 5 iron, granted a few degrees weaker loft. It’s also going to be a lot easier to hit. But remember, the conditions you’re playing in might affect performance. For example, playing in a windy condition can affect your tee shots and putt on both irons and hybrids, thus skewing the final results.

You may be wondering why we keep mentioning swapping your hybrid for irons. Well, the benefits of replacing your 5 iron with the equivalent hybrid far outweigh that of keeping it.

23 Degree Hybrid Golf Club vs Iron: How to Choose One 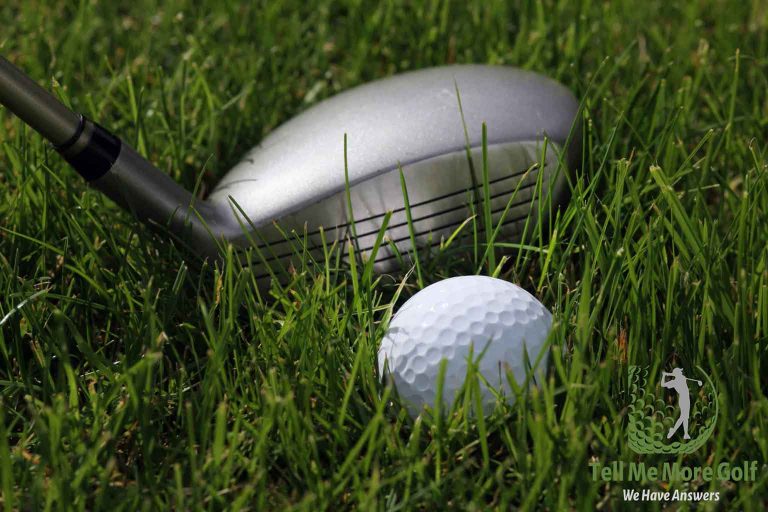 The equivalent of a hybrid with a 23 degree loft is a 4 iron. A 23 degree hybrid club is 10 yards longer than the 4 iron. If you intend to replace your iron, you can build the hybrid to its spec (same loft, length, and shaft) to achieve a similar distance. All you need to do is just ensure the appropriate distance gap is covered when changing from the iron to hybrid. Maybe you have to hit both.

Moreover, the graphite shaft on a hybrid club is lighter and longer than that of its iron counterpart. When hit with the same swing, a 23 degree hybrid with these specs will go further. If you have a slow or moderate swing speed, the hybrid will benefit your game and you’ll start to see an increase in carry (and maybe roll) on the hybrid. You’ll also be able to play it from a different lie or launch angle.

If you play both clubs, you may likely hit the iron straighter (with closer proximity to the hole) but the hybrid will gain you a few yards above the iron. Expect the hybrid to be more forgiving than the iron and less likely to lose distance when you play. However, because it is longer, you may need to choke it up to keep the distance where your iron would be.

Ultimately when deciding, you should settle with the club that helps you gain distance, improve your shot accuracy, and is more consistent in getting that sweet spot contact.

How Many Hybrids Should I Carry?

It’s hard to quantify, but let’s look at what other golfers are doing. Most PGA tour players will have at least one hybrid in their golf bag. A huge number of amateur golfers have followed suit and now have one or more in their bags. Many others, even iron addicts, continue to convert to hybrids.

his popularity of hybrids has to do with the fact that they’re easier and more comfortable to hit than conventional irons. Many hybrid club designers have now adopted a similar iron numbering system for their hybrids to make switching to hybrids easier. Take out your 5 iron, put in a new 5 hybrid.

Ultimately, it comes down to personal preference. You can get yourself a 5 hybrid first and test it. See how it does with your current swing. On another note, if you’re struggling with your 2, 3, 4, or 5 irons, you can try corresponding hybrids and if good, replace them with hybrids.

Go with as many as you can afford, there is no limit to how many you can have in your bag. If they keep your confidence level higher on the golf course, why not? Finally, we say 3 hybrids in your bag are good enough (we looked at what many others have in their bags on average).

Why can I hit irons but not hybrids?

One of the major culprits is when you don’t play your hybrid like you play your iron. You need to swing your hybrid as you would your iron. Most golfers don’t usually have problems with iron/hybrid but their driver.

If you take a sweeping stance, keeping the ball too far forward, you might be making a poor impact. When hitting your hybrid, make sure you’re hitting down on them, not sweeping the ball.

Additionally, your ball setup may be causing the problems. If you’re snapping your wrist or experiencing “nasty hooks” as golfers call them, then you need to adjust your ball position. Also, keep your takeaway low and slow and make a ball impact while playing the hybrid back in your stance.

Who makes a 7 hybrid golf club?

There are plenty of manufacturers that design 7 hybrid golf clubs. The likes of Callaway, Taylormade, Ping, Tour Edge, Cleveland, Cobra, Thomas Golf, Adams Golf, and many more. The most popular club in this genre is the Callaway Big Bertha 7 Hybrid Club. They may not be as popular as your regular 5 hybrids, but they are certainly out there if you know where to look.

Is hybrid better than iron?

The short answer: yes. The long answer: it depends. You shouldn’t conclude a hybrid is better than an iron until you consider (or test) the features as well as your need. Fortunately, that’s easy. Looking at the design of the hybrid, compared to iron, we can say that it’s better. But again, your mileage may vary. Here are some of the benefits a hybrid profers that may be absent with an iron:

Why use a hybrid instead of an iron golf club?

There are plenty of reasons you may want to use a hybrid instead of an iron. Remember that the hybrid is here to serve you the pros of the iron… they are easy to use, have decent angle and sweet spot, have excellent forgiveness, and offer more distance. Having said that, let’s look at some of the reasons you should be using a hybrid instead of an iron:

What is the difference between a hybrid and iron?

It’s a known fact that most golfers will either play a hybrid or iron on the field. There are technical and non-technical differences between a hybrid and an iron. Consider the important ones:

No, there are significant differences between them. Even just looking at the two, it’ll be obvious they are not the same thing. But we need to look beyond just the clubface.

5 irons are typically the longest in a golf set and often hit further in a modern set. They hit the ball farther than your older sets of irons and manufacturers now engineer them to be easier to hit. 5 hybrid, on the other hand, fall in between a 5 iron and wood. They have a few iron traits and a few wood traits. They’re designed to help golfers at all levels to hit the ball better, higher, easier, and more consistently.

These clubs are performance enhancers, they help tour pros and beginner golfers easily hit the ball better, higher, and more consistently than when playing with an iron. Yes, they aren’t designed for only amateur/beginner players. Jordan Spieth, Patrick Reed, Dustin Johnson, Collin Morikawa, and Webb Simpson (all of them PGA players) have all used hybrids.