Is The Hammer Driver Legal?

The Hammer X Driver is an illegal golf club best known for its late night infomercials that have been played on the Golf Channel for over a decade. These loud “over the top” style advertisements feature six time long drive champion Jack Hamm crushing golf balls with every tee shot while screaming “Pow!” “Wham! And “Boom!”

The ad claims that the golf club contains new technology, making it the longest driver on the market. Due to the large “gaps” or “holes” in the club head, this club is not legal for play by the rules of golf.

The Legality of the Hammer Driver 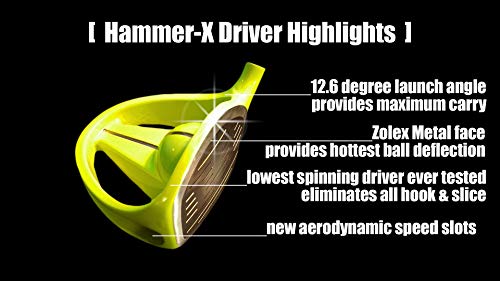 According to the USGA, the Hammer Golf driver is a non-conforming club, and for this reason, it is an illegal driver. I’d go as far to even call it a scam!

There are no shortcuts in the game of golf, and while new golf clubs can help:

Golfers who are searching for a new driver should start by getting fitted, and purchasing a conforming driver from a trusted brand like Callaway, TaylorMade, PING, Cobra, or Titleist. Advancements in club head, club face, and graphite shaft technology allow these new drivers to launch the ball faster and further than possible with the Hammer X Driver.

Why Is The Hammer Driver Illegal?

The design of the driver head is what makes the Hammer X an illegal golf driver. There are certain specifications that all golf equipment needs to conform to in order to be considered legal for play.

These clubs are allowed to be used in any golf event from a local charity tournament to the PGA Tour. Every major golf manufacturer submits all of their latest club models to the USGA, and they will not sell them unless they are considered to be “conforming.”

There is a bit of a back and forth every year between research and development teams from these major manufacturers and the USGA each year, as the goal of the manufacturer is to pack as much technology into the club as possible without crossing the line into “non-conforming.”

This constant drive for improvement has led to recent advancements in club face technology, leading to a thinner club face with a larger sweet spot. Graphite shafts are now optimized to generate maximum kick and clubhead speed. The Hammer driver is over a decade old, and the changes they made to a traditional clubhead in search of performance is what made it illegal.

One of the main features of the Hammer X Driver is the removal of clubhead material from the middle of the clubhead, leaving two large open slots that are visible at address. The theory behind this change is that the weight removed from the driver head would lead to more clubhead speed, thus a higher ball speed and further launch.
These open slots are precisely what makes the club non-conforming, as it is illegal for a clubhead to have any holes or open areas in the clubhead. We now know that this method isn’t very effective for increasing club head or ball speed in the first palace, making this club inferior by today’s golf equipment standards.

What is the Broken Rule?

This makes it explicitly clear that the Hammer X Driver is designed illegally. For this reason, it has never been included on the USGA’s list of conforming golf clubs.

The quality of the commercials for the Hammer X Driver should tell golfers all they need to know about this golf club, as they are both outdated and a bit ridiculous. Their loud, brash, and frankly hilarious commercials were the predecessor to today’s similarly toned PXG advertisements, and are remembered fondly by golfers of a certain age.

We use cookies on our website to give you the most relevant experience by remembering your preferences and repeat visits. By clicking “Accept”, you consent to the use of ALL the cookies.
Cookie settingsACCEPT
Manage consent

This website uses cookies to improve your experience while you navigate through the website. Out of these, the cookies that are categorized as necessary are stored on your browser as they are essential for the working of basic functionalities of the website. We also use third-party cookies that help us analyze and understand how you use this website. These cookies will be stored in your browser only with your consent. You also have the option to opt-out of these cookies. But opting out of some of these cookies may affect your browsing experience.
Necessary Always Enabled
Necessary cookies are absolutely essential for the website to function properly. These cookies ensure basic functionalities and security features of the website, anonymously.
Functional
Functional cookies help to perform certain functionalities like sharing the content of the website on social media platforms, collect feedbacks, and other third-party features.
Performance
Performance cookies are used to understand and analyze the key performance indexes of the website which helps in delivering a better user experience for the visitors.
Analytics
Analytical cookies are used to understand how visitors interact with the website. These cookies help provide information on metrics the number of visitors, bounce rate, traffic source, etc.
Advertisement
Advertisement cookies are used to provide visitors with relevant ads and marketing campaigns. These cookies track visitors across websites and collect information to provide customized ads.
Others
Other uncategorized cookies are those that are being analyzed and have not been classified into a category as yet.
SAVE & ACCEPT

Save Up To 40% OFF On Discount Clubs From GlobalGolf!